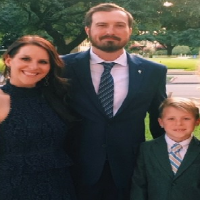 I have recently heard from many people that "People were saved by looking forward to the cross before and looking back at it after". I have also noticed that the majority of people who have said this were Calvinists. Since the Death, Burial, and Resurrection of Christ was obviously not the focus of Abraham's Faith in Romans 4, how do you construct a view of the Bible without considering the dispensation of the scripture you are reading? In other words, what scripture do people use to defend this view of looking forward to the cross? I understand that the Bible starts speaking of a Messiah to come in Genesis, but I do not think Jesus' disciples understood fully what was going on, and they were with Him. In Luke 24

13 And, behold, two of them went that same day to a village called Emmaus, which was from Jerusalem about threescore furlongs.

14 And they talked together of all these things which had happened.

15 And it came to pass, that, while they communed together and reasoned, Jesus himself drew near, and went with them.

16 But their eyes were holden that they should not know him.

17 And he said unto them, What manner of communications are these that ye have one to another, as ye walk, and are sad?

18 And the one of them, whose name was Cleopas, answering said unto him, Art thou only a stranger in Jerusalem, and hast not known the things which are come to pass there in these days?

19 And he said unto them, What things? And they said unto him, Concerning Jesus of Nazareth, which was a prophet mighty in deed and word before God and all the people:

20 And how the chief priests and our rulers delivered him to be condemned to death, and have crucified him.

21 But we trusted that it had been he which should have redeemed Israel: and beside all this, to day is the third day since these things were done.

22 Yea, and certain women also of our company made us astonished, which were early at the sepulchre;

23 And when they found not his body, they came, saying, that they had also seen a vision of angels, which said that he was alive.

24 And certain of them which were with us went to the sepulchre, and found it even so as the women had said: but him they saw not.

25 Then he said unto them, O fools, and slow of heart to believe all that the prophets have spoken:

26 Ought not Christ to have suffered these things, and to enter into his glory?

27 And beginning at Moses and all the prophets, he expounded unto them in all the scriptures the things concerning himself.

So how were Abraham, Noah, David or others to know this?

Does anyone believe that people before Christ were saved by Faith in Christ alone?

Would love some help and clarification here, Thank You!

Top Posters For This Question

Top Posters For This Question

No sir, I would hold that the shed blood and sacrificial death of the Lord Jesus Christ is the ONLY propitiation acceptable in the sight of the Lord God for any sinner to be saved in any time.  Yet my

Brother DC, Although you presented this question to Brother DaChaser (whom I believe admits to being a Calvinist), and not to myself, since you and I have engaged in discussion already on the mat

72 answers to this question